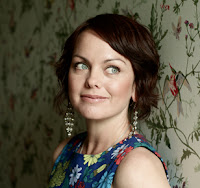 I met Australian songstress Prita at a concert that was part of the Stadtklang project earlier in the year. Enchanted by her music, her lyrics, the loop pedal she incorporates in her own pieces, and her extraordinary aura, we exchanged a few words after the gig and have kept in touch since.

I've rarely met a musician who connects with their audience in such a natural, yet bold and quiet way.
Prita looks you straight in the eye as she sings, but she's not yearning "love me, love what I do" she is sharing what she does with you. She gives you the feeling that if you like what you hear she will be delighted, but if you don't "well hey .... thanks for coming, anyway!"

Ahead of her next concert here in Düsseldorf on Thursday August 8, open air at the Vier Linden beer garden in Oberbilk, I asked her a few questions about her great gift of song and what makes Prita .... well Prita!

If you didn't sing, what would you be doing?
Maybe I'd have my own café/cupcake shop or a wellness center with lots of healthy types of things, juices, yoga and massages.

Can you tell us about your very first gig?
I think my very first gig was at kindergarten dressed up as a 'star' as in twinkle twinkle little star.. or something like that.. I sang all through school any chance I got.. but my first 'proper gig' was with my first band (blues/rock) in Albany WA, when I was about 12 or 13 yrs old, we played at the beautiful big old town hall in the centre of Albany at the end of year guitar school concert (I was learning classical) .. I was the singer in the band and was dancing a lot and wearing a mid-riff top - very cool in the 80's no doubt.. singing songs like 'roadhouse blues' (the doors), 'total control' (the motels), 'come together' (the beatles) etc.. the band was put together by the teachers at my guitar school and the band was called 'protege'.

The message in "Get Out of Your Own Way" is very simple, but actually doing this is of course a very different matter. How did you managed to make that jump?
It took me a long time to build up the confidence in myself and my abilities as a singer and performer - I worked and studied all kinds of other things before I made the big jump - but I really just got to a point where I had to put all my energy and efforts into being a musician and performer - I had to give it a shot - or risk regretting it later in life that I never tried.. - and so far it has definitely paid off for me - making that jump into the unknown and following what I love to do.

Why did you choose to cover Nina Simone's "I'm Feeling Good", that's pretty courageous!
I love Nina Simone, she has such a classic style and attitude - I love watching old videos of her live shows on youtube - she is very passionate and real and just so talented - I guess she is one of my heroes - and also I just love the positive lyrics in 'feeling good' it's a nice way to end a show on a positive note!!

Where were you before you were lived in Berlin?
I lived in Australia for many years then went travelling overseas - worked for 2 years as crew member on a private yacht, travelling all over the Caribbean, USA, Mediterranean before settling back in my home town for a few years to pursue music and then leaving home to follow my dreams of living and touring in Europe!!

What's next for Prita?
I hope to have a new Live Album coming out soon - I did some recording in France when I was on tour recently and would love to release that soon!! I'm also playing in a few festivals in Germany and have lots of touring around Germany before I head back to France and possibly the UK again for some touring!

Good luck Prita! You certainly deserve every success and I'm really looking forward to seeing you again!
Thanks heaps for the interview Caroline! :) See you soon!

Check out Prita's videos, bio, music and photos on her website

The concert will take place even if it is raining - then it will be moved inside!
Vier Linden
Siegburger Str 25
40591 Düsseldorf