The audience is enchanted yet, at the same time, completely on edge as the very young acrobats leap and climb and throw themselves into situations that are so precarious that all you can do is hold your breath!

Séquence 8 by the young Canadian circus company Les doights de la main is not 'just' acrobatics, it's also a social piece about the necessity of being dependent on others and yet being able to shine on a very individual level.

Philosophical, charming, thought provoking and also very entertaining. It's about life, the fragility of friendships. You, me, you and me.
Quite an achievement.

Simply captivating - I wish I could go again!

The festival continues until October 6

Galliano at the düsseldorf festival!

As he played the very first note, the smile in Richard Galliano’s face began to be noticeable. Although he had a sold out venue and created a concert that earned him a long lasting standing ovation, what really drew us was that smile, the joy of once again making music. For those of you who were there and didn’t see it, maybe you were too distracted by his fashionable red shoes?

It didn’t matter that he was playing music by two composers who lived around 250 years apart from each other. These very demanding pieces sounded completely effortless and uncomplicated on his accordion. Playing pieces that are not even original for that kind of ensemble. Galliano was living every phrase and playing them with an astonishing artistry and sensibility.

The concert of Galliano and his quintet, last Monday September 23, where he played music by Antonio Vivaldi and Astor Piazzolla, was one of those somewhat rare opportunities were you can actually be part of the creation of music.

The listener was treated to a masterfully and really creative contemporary interpretation of a so called “classic”. Regardless of your occupation and professional background, he made sure you felt immersed in this new musical dimension.

We should learn what his smile is all about: he enjoys his concerts possibly even more than his audience and shares in a very contagious manner this feeling with everyone.
Thank you RhineBuzz for the opportunity to witness this amazing performance, and for Galliano and the incredible düsseldorf festival!

The  düsseldorf festival! continues until October 6

25 Years Unique - the Celebration at zakk

With Laura Vane and The Vipertones,

Eddie Pillar of Acid Jazz,  and many, many more on two floors ..... and of course Henry Storch 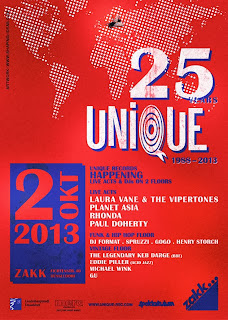 Henry Storch's Unique Records from Düsseldorf is one of the last independent dance record labels left in Europe specialising in soul, funk, rare grooves, hip hop, drum'n'bass and especially heavy breakbeats of all kinds!
Join Henry and friends and collaborators from 25 years of Unique and some truly big names in the world of dance music at zakk to celebrate with 8 international DJs from 4 live acts including the very bubbly Laura Vane from Brighton, England and her band the Vipertones, from the Netherlands.

The line up:
Live:

Tickets €15.00 online from Zakk with paypal, with eventim and at Hitsville in the Altstadt

or, try and win! Tell me where Laura Vane is from, send this to win@rhinebuzz.com and the first correct answer wins two tickets to the party! Thanks Henry! 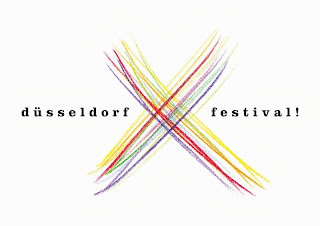 Position yourself in front of the majestic Rhine in the old part of Düsseldorf, Germany. Then picture a multi-award winning, avant-garde Dutch contemporary dance company and a traditional Indonesian Gamelan ensemble doing a performance together. Can you really imagine it? A musical tradition of almost two millennia collaborating with a European modern dance company alongside the Rhine?


On September 19 and 20 the LeineRoebana Dance Company along with the Kyai Fatahillah Gamelan Ensemble created an incredible and enigmatic atmosphere with their performanceGhost Track. With a very enthusiastic public which was in an absolute awe during the 75 minutes worth of show, the musicians and the dancers communicated with great ease and sensibility a really complex and yet so easy to appreciate piece of art.

As a foreigner in Germany and as a young artist I am really starting to understand why I crossed the Atlantic and learned a new language, cultural offerings like the düsseldorf festival! - which I never would have known about had it not been for RhineBuzz - where you can hear the music of Bach and Mozart in a church one day and the next an eclectic incredible performance like Ghost Track make my time here richer than I would have ever imagined.

Arturo is a  Mexican/Peurto Rican student at the Robert Schumann Music Conservatory. Not only is he a most talented musician, but he also has a keen interest in all the arts added to which, he also happens to be a fabulous cook! All elements which are greatly influential at the düsseldorf festival!
He will be following the festival along with me and I certainly look forward to more of these quite personal posts :)


The düsseldorf festival! hits town on Wednesday September 18 with a spectacular opening evening in the beautiful St Andreas Church with works by Bach, Poulenc, Haydn and Mozart in a seductive concert featuring Mark Schumann, of RhineBuzz favourites The Schumann Quartett, all under the charismatic direction of Ulrich Brall. This concert was sold out pretty much as soon as it was announced.

Then up until October 6, the city will be treated to an incredible assortment of dance, contemporary circus with Circa; magic, jazz, funk with Amp Fiddler; folk music, hip hop with Rage; theatre, beatbox, poetry, harps with Giovanni Pessi and Susanne Wallumrød;
and .... and .... and ... all taking place at various locations throughout the city and based at the Theatre Marquee on Burgplatz.

Once again Christinane Oxenfort and Andreas Dahmen have put together an incredible festival. Us Düsseldorfers are so very fortunate to have this on our doorstep.


Take a look at the programme and if you are uncertain what to choose, perhaps go for something you are not normally drawn to. All performances are chosen with great diligence to bring you the most colourful, dynamic and stimulating festival imaginable.

Win tickets with RhineBuzz!
Tell us which countries the dancers are from in the performance Ghost Track and you can win two seats for Friday September 20.

Send your entry to win@rhinebuzz.com. The first correct answer wins the tickets! If you have already won tickets for the 2013 festival you are exempt from taking part. 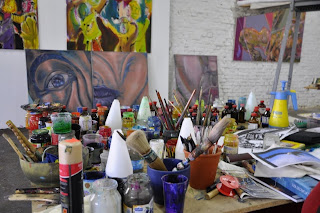 On the first two weekends in September the city invites you to take a look around some 500+ artists' studios which are opened to the public. 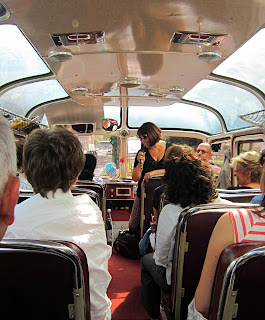 You can pick up a flyer, which lists the studios and gives you a free map (look under 'Karte') in numerous cafés, museums and book stores around town and you can go and explore independently or, you can take a tour where you will be driven to 5 or 6 different studios in a funky vintage bus. Each tour is accompanied by two artists who introduction you to the studios you are about to visit and encourage an exchange with the the artists you visit.

RhineBuzz will be giving two tours in English, on the Sundays, Sept 8 and 15, at 3pm. On one I will be accompanied by Gesine Kikol, who studied at the Düsseldorf Art Academy and on the second writer and poet Frank Schablewski will join me.

Not only do you get to see some fascinating art over the weeekend but you also have the chance to discover many hidden spots in the city. Many said this was the best RhineBuzz event of 2012, as you venture into parts of the city, you simply had no idea that existed. We visit former bunkers, an artists' colony built by Hitler, studios in disused factories by the Rhine and beautiful, balmy courtyards. 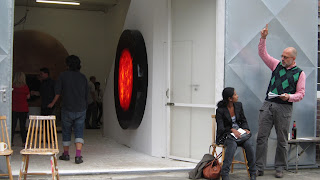 Open Studios is not just about visual arts - on Saturday September 14 at 5pm and Sunday 15 at 4pm, there will be two premiere performances of electronic music by Damian T. Dziwis and Maximillian Yip at Kunstpunkt Studio 209 - Sound @ART at the old artists' house in the city in the foyer of Atelierhaus Sittarder Strasse 5.

On the Fridays before Kunstpunkte, many extra spaces are opened where you can not only see art and meet the artists but there are also special performances, workshops and talks. See Off-Raüme for details.

The RhineBuzz tours in English will take place on
Sunday Sept 8 at 3pm and Sunday Sept 15 at 3pm
€15.00 per person
Reservations by email to Petra Weiß: petra.weiss@duesseldorf.de

Bus leaves from Düsseldorf Rheinterrassen, Joseph-Beuys-Ufer 33
Please by there by 2.50pm