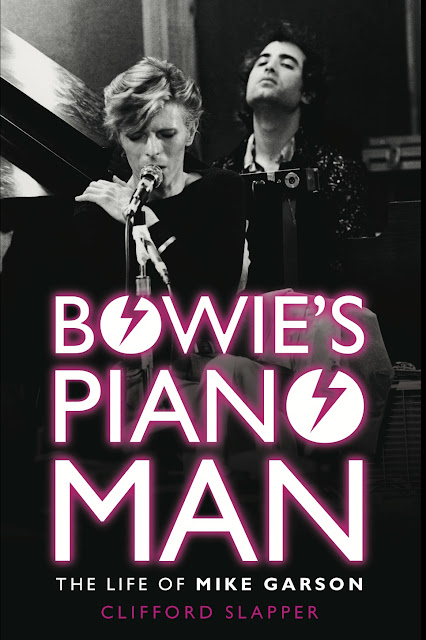 Bowie's Piano Man will be an evening celebrating the music of Mike Garson - David Bowie's piano man for some 40 years and a musician often cited as one of the top ten pianists around the world.
Clifford Slapper, Mike Garson's biographer is also a pianist, this is why the two met.
It seemed just right that Clifford should be the man to write the biography of Mike Garson, the two built a great trust and an intriguing book is the result; more than just a biography of a world-class musician, it is a book of a musician by a musician that is full of hope, healing and a great understanding of all that music, without boundaries, can be.

We will be talking with Clifford Slapper about his book and his friendship with Mike Garson which has lasted many years right up until now as they were last together in London just recently when Bowie's last band to tour with him, reunited in London for the most poignant Brit Awards.

The evening will be hosted by Mayo Velvo, chansonnier and Liebling of Düsseldorf's cabaret scene and, also a great Bowie admirer. Mayo will be treating us not only to his charismatic presentation, but he will also sing a couple of Bowie songs, accompanied by Clifford Slapper on piano, making these songs his very own.

Mayo will be joined by the singers, Edi Winarni, Linda Hergarten and Ian LeBlanc. Four corners of the world of music, electronica, classical, rock and chansons will come to together on this evening, to make for a surprising performance in the true sense of what art is all about. Not 100% planned, and eye-opening for both audience and protagonists.


Edi, is a Düsseldorf multi-media artist working in several disciplines including electronic music. He was introduced to me by Emil Schult several years ago, when he was singing with the band MIT. His performance to this eclectic evening can't be missing in the city that grew the very roots in electronica and gave them to the world. 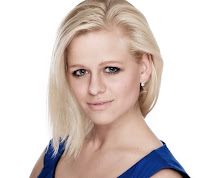 Linda is a graduate of the Robert Schumann Music Conservatory. I first saw this young woman perform Kurt Weil songs side-by-side with none other than Campino, of Germany's biggest rock band Die Toten Hosen. Entitled 'Welcome to Germany' This most moving concert was given to recall the the exhibition 'Degenerate Music' that took place in Düsseldorf over 70 years ago.
Linda had such a wonderful, relaxed stage presence I have wanted to work with her ever since and am now thrilled that she will be joining us for this wonderful event.

In total contrast, Ian LeBlanc is the singer and songwriter of the indie rock band Aberrations. Having recently released their first album they are now making the rounds on the live circuits and steadily building a strong following whilst having a whole lot of fun on stage!
Ian as it happens, is a musician with a great respect for Mike Garson, when I discovered this, I simply had to invite him to join us on at this performance.

The evening will be embellished by Luca Kohlmetz and Ben Schlemmer, students at the Düsseldorf Kunstakademie. They have been given the exclusive rights to work with images from the book 'Bowie's Piano Man' just for the evening.

I'm thrilled to see how Düsseldorf singers have embraced this unique performance, overcoming their uncertainties and willing to get up there and give this a go, so much in the sense of Mike Garson who is the master of improvisation. It's going to be a great night of wildly different music genres coming together to celebrate music from Düsseldorf that is linked to some of the greatest musical influences in the world.
Thank you dear performers, this evening will be a true celebration of so much that RhineBuzz has become bringing the story of this event full circle as it began with further research I was doing last year on the music history of Düsseldorf for the city's 'We Love Music' tour which I wrote in 2011 ... but more about that, and how all this came about, beginning with photographs I was privy to, taken in the 1970s in New York, at this unique RhineBuzz evening at Stahlwerk.


Any profits from this event I wish to donate to SingPause - a pioneering Düsseldorf project for the musical education of children in primary schools, headed up magnificently by Manfred Hill.

This event could not be considered without the people who are dedicated to music and who are so very special in my life.

My heartfelt thanks to prolific Bowie biographer David Buckley who not only introduced me to Clifford last year, but is just brilliant in answering my never-ending questions about electronic music
Thank you to music guru Henry Storch who supports all that I do in such an unprecedented, giving way
To Stefan Prill at Stahlwerk for his generosity
To Luca Kohlmetz, just thanks :)
To Thomas Buchem and Guido Trinks for ideas and support that I could not do without
To Julia Coulmas of Fräulein Swing and Helmut Woigk at Kawai
To Maja
To Christop Christian Beermann for his talented eye and never saying no, even when I need last minute help!
To photographer Pete Marifoglou for his trust and extraordinary eye
And to all who are helping put this together ... the musicians, the singers, my fab assistant Linda, I couldn't do what I do without you!

April's 'RhineBuzz Around Town' event we will be visiting the Julia Stoschek Collection, a private museum dedicated to video art which is an art form that has its roots in NRW.

Housed in a spectacular space in Oberkassel, RhineBuzz is pleased to offer the first trip to this unique collection including a tour in English.
The current exhibitions at the JULIA STOSCHEK COLLECTION are NUMBER TWELVE Hello Boys, an exhibition of 13 artists that draw a line from the feminist video and performance pioneers of the 1970s to selected contemporary works among female photographers and video artists and NUMBER ELEVEN which is dedicated to French artist Cyprien Gaillard.

The Krypta with Emil Schult 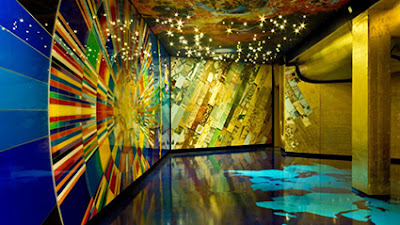 A most exclusive RhineBuzz event!

Emil Schult, longtime collaborator of Kraftwerk, creator of the famed Autobahn cover and contributing artist of the 3D visualisations of the ongoing sell out Kraftwerk concerts is a working Düsseldorf artist and happily a big RhineBuzz fan :)
From 1995 to 2000 Emil decorated the Krypta in the Robert Schumann School of Music, painting the ceiling, walls and floor intricately with all encompassing esoteric themes. Stockhausen composed a soundtrack for the Krypta.

This is a space of great tranquility and beauty. A most special place in the city.
Emil has agreed to give us another public RhineBuzz tour of the Krypta. The last was three years ago! Spaces are limited to 20, price €15:00