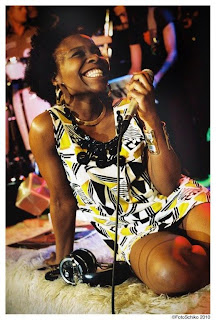 Due to the weather this has now been moved to the café in Stahlwerk
The very lovely Carmen Brown and her band the Elements will be giving a free, feel-good, funky concert at the beach bar Treibgut this Friday September 2.
Spent the afternoon with Carmen yesterday as she joined us for the "We Love Music" tour for the newspaper Bild. 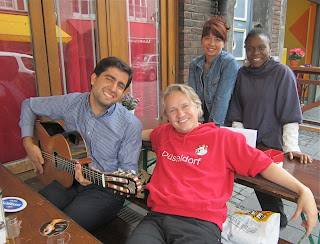 with Rafael Minarro, Tim D. Morand and Carmen Brown on Ratinger Strasse
Carmen's so bubbly, so just ... gorgeous, her sunshine manner is quite simply infectious, her gig at the Jazz Rally in June had everyone up and bopping - you'll be so missing out if you don't come along ...
Early start at 8pm!!! :) 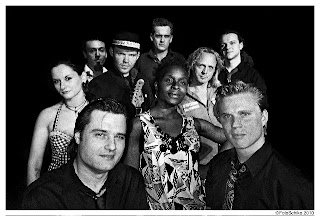 Come and join us for the Golzheim Festival on Saturday September 3 from 3pm around the area of the Theodor Heuss Bridge on the Golzheim side.


You really shouldn't miss this wonderful free festival on the banks of the Rhine. Headlining this year will be Laura Vane and the Vipertones from Brighton at 5pm, so come prepared for great party!
Live music carries on at the outdoor stage up to 10pm and then well into the night with a Unique Session at the Blue Note on Kurze Strasse 13 in the Altstadt.
On Sunday there will be a kiddies flea market and outdoor disco. 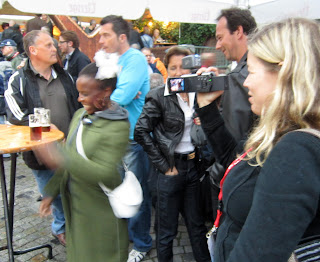 Many thanks to Tracy Bymoen from Canada who I took care of during the Jazz Rally in June for Düsseldorf Marketing and Tourism. I introduced her to some of the most musically talented people we have in the city for a great video she then made about the music festival and our city.
Today this has been approved by CNN and I know that all involved will be delighted to hear this.
Thanks guys, you are all simply brilliant and it's an absolute pleasure to work with you and see what RhineBuzz has turned into! 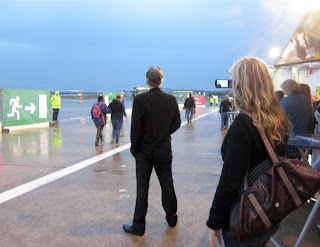 On CNN it is here

"We Love Music" with Antenne Düsseldorf

We spent a great Saturday afternoon yesterday when Tim D. Morand and I gave our "We Love Music" tour to winners from local radio station Antenne Düsseldorf for Düsseldorf Marketing and Tourism. 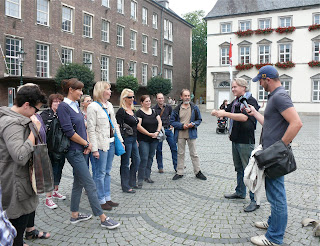 Tim held court, giving the tour in German and engrossing and entertaining all around once again.


As Tim talked about Henry Storch outside his club the Blue Note on Kurze Strasse in the Altstadt I was able to give away Maxi CD's by Laura Vane who is on Henry's Unique record label, kindly given to me by henry earlier in the day.

Laura and the Vipertones will be playing at the The Golzheim Festival at 5pm under the Theodor Heuss Bridge on September 3. Join us for the tour at 3pm in the Altstadt and then we will all rush over to the Festival for what is guareented to be a rocking show. I met Laura in Stone last year and believe me, she puts on a wonderful show. 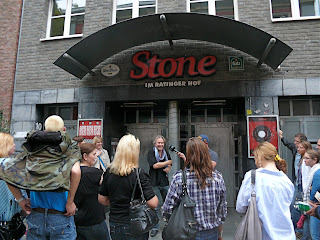 To finish the tour we were delighted to have two tenors from the Chorus of the Deutsche Oper am Rhein, Andreas Schönberg and Luis Fernando Piedra.
Some of our guests had tears in their eyes. I just love doing this, gently cojoling people into experiencing something they might not normally.

I am delighted that Tim and I are able to turn the tour into such a memorable event as we know so many people in musical professions in the city who are happily keen to help out. The surprised faces of our guests are such a joy to see!

Responses to the tour were excellent; we already have new people interested in visiting the Opera with the RhineBuzz group on one of our monthly visits, another visitor said the highlight for her was discovering that we had such an excellent all-round music man as Henry Storch right here, a local Düsseldorfer, and others were just astounded at the little dip into history they discovered about their hometown hearing tales of Schumann and Mendelssohn who once worked avidly here in their neighbourhood!

Tomma Abts at the Kunsthalle 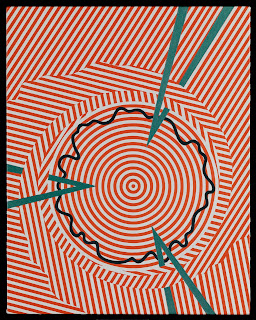 Feio 2007 Tomma Abts
Turner Prize winner Tomma Abts is a German artist and professor at Düsseldorf’s Kunstakademie (art academy). From 16 July to 09 October 2011, the Kunsthalle Düsseldorf will be exhibiting 12 of her canvases and a series of previously unknown drawings, exploring the relationship between space, lines and shapes. Abts, who currently lives in London, has already had her work featured by numerous internationally renowned art institutes.
The special thing about Abts’ paintings is that she only creates between two and eight a year because each one is subject to a painstaking production and correction process. The paintings have various things in common – each one is made up of geometric shapes painted in oil and acrylic on a 48 x 38 cm portrait format and each one is made up of multiple layers (sometimes you can even catch glimpses of the original canvas), which – as one journalist pointed out – makes you feel as if you “could really dive in and get lost in the picture”. Despite their common features, each painting is unique and there is always something new to discover.
At first glance, the paintings might not appear like much, but when you take a closer look you realise that they have more to offer. In homage to her birthplace of Kiel, Abts has given each of the paintings a person’s name from this area. I must admit that the one pictured here (Feio) actually reminds me of turquoise chopsticks tugging at black noodles surrounded by swirls of ketchup and mayonnaise! This kind of art may seem inaccessible to some, but it’s interesting to analyse and ask yourself what it means to you personally – other motifs that I personally recognise are lightning, rope, a windmill and waves, but why not see for yourself – this interesting (and very different) exhibition is certainly worth checking out!
The admission price is EUR 5.50 for adults and EUR 3.50 for concessions
KUNSTHALLE DÜSSELDORF
Grabbeplatz 4
40213 Düsseldorf

Emil Schult at the Düsseldorf Art Academy on CNN

I'm delighted to be freelancing for Düsseldorf Marketing and Tourism by setting up schedules and taking care of more and more international journalists and tour operators who are interested in knowing more about our wonderful city. Today we are very pleased to see that CNN have approved this video by Tracy Bymoen from Canada who was here over the Jazz Rally in June.
Apart from showing her around the city's music scene, I was happy to introduce her to Emil Schult as we took a look around the Arts Academy where Emil was a student of Joseph Beuys and Gerhard Richter from 1968 -72.
This was a very special RhineBuzz project bringing together the best of our city. My heartfelt thanks goes to Emil Schult for this rare chance to see his view of the oldest arts academy in Germany and Henry Storch of the Düsseldorf label Unique Records for the soundtrack from Laura Vane who will be playing here in Düsseldorf on September 3 at the Golzheim Festival and to Tracy Bymoen - thank you!


DUSSELDORF, GERMANY
Emil Schult is best known for his work with Kraftwerk, the internationally famous band formed in Dusseldorf in 1970.

However, Schult prefers to be known for his art these days. And when he is not working on his own art, he is mentoring art students, many of them from the Kunstakademie, Germany's largest and most forward thinking art school. It's a place close to Schult's heart, as he was once a student there himself.

I had the rare opportunity to peak inside the doors of the Kunstakademie with Emil Schult. As you'll see in this short interview and tour, Schult has an inspiring view of what defines art...and he is passionate about the need for more creativity in the world.

For more see my other Dusseldorf feature here: http://ireport.cnn.com/docs/DOC-641500

Special thanks to the Kunstakademie and, of course, to
Caroline West of RhineBuzz.com
for organizing this very exclusive interview.

Additional thanks to filming permissions from Destination Dusseldorf, and to Henry Storch / Unique Records for music/soundtrack permissions.