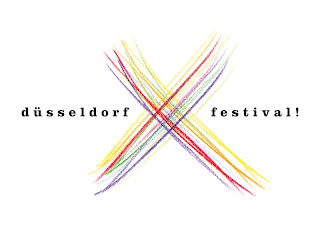 
Stimulation for all senses can be experienced in the eclectic programme of 19 days of mesmerising performances at the düsseldorf festival! - from nouvelle circus, to jazz, opera, ballet, concerts in pitch darkness, Korean heavy metal, flamenco and more in numerous locations around the city, from Altstadt club basements to the beautiful baroque churches of the city, but most of all in the festival marquee on Burgplatz with a brand new bar inviting you for both pre and after show drinks and extra performances, often in the afternoons.

To celebrate this very special anniversary Christiane Oxenfort and Andreas Dahmen, the two artistic directors of the festival, have created a happening that will take to the streets of the Königsallee and Shadowstrasse on Sunday September 27 between midday and 6pm.

A brass band of 40 from Italy, La Grande Bada Metafisica, will come across an equally mystical and absurd visual troupe on the Königsallee - performers on stilts, created by the visual artist Johannes Terbach will appear as surrealist sculptures for just a split second on the route; more art than artists that amaze and inspire with their dazzling, acrobatic skills. Then when a choir will be added and then also a tambourcorps, the fantasy festival parade will take on undreamed proportions ….

The French theatre company Transe Express will take stage on the Schadowplatz - a spectacle in a class of their own.

Under rhythmic drumming and blaring fanfares, a ‘human mobile’ is hoisted into the air, carried by the sounds of music created by toy-like lead soldiers that sway softly above the heads of spectators ...

To help finance future such marvellous projects the festival has set up a crowdfunding platform, the info is in German, but it is very straight forward to navigate and if you can make a donation, no matter how small, it all goes to fund future projects as vibrant and eye-opening as this. You can give on Startnext, here. Thank you so much!

Congratulations Christiane and Andreas, you have created a wonderful celebration of what it is to be human - the düsseldorf festival! is is unrivalled in this region for it‘s colourfulness & variety - long may you continue!