b.17 Ballett am Rhein


“The creative act knows no memory, no science and no cognizance. These things are always bound up with the past. The creative act accepts no conditions outside of itself. That is why it is free.”
Sergiu Celibidache

It is my first experience at the Ballett am Rhein, for one of their new productions called simply “7”. I’ve seen ballet before but nothing quite like this. In my native Puerto Rico, we have a couple of ballet and contemporary dance companies, but they don’t do more than a couple of performances a year, presenting programmes limited very often to “standards” like the Nutcracker or Giselle. I have also seen several ballets here in Germany but something as strong and captivating like Martin Schläpfer’s work, never. He is the current director of Ballett am Rhein and fast becoming one of Europe’s top choreographers.

The work is a complex and emotionally charged choreography that combines great imaginative and sublime, often abstract, movements to Gustav Mahler’s complete 7th Symphony. If you haven’t heard this symphony, let me tell you: it is a monumental orchestral tour-de-force with rich and dense harmonic colors juxtaposed with astonishingly beautiful melodic moments. So now imagine a ballet on top of that. At a first glance it just seems too complicated, that is why in the beginning as I sat there through the performance continuously trying to understand it, I asked myself the most basic question of all: Why?

Then I remembered a phrase by legendary Rumanian conductor Sergiu Celibidache. Immediately I stopped thinking and just went along with the work until finally I was liberated from myself and everything around me through a wonderful and marvelous work of art full of sound and movement in a way very rarely seen before. If you haven’t got plans for Friday December 6, I strongly advice you experience this performance.

RhineBuzz can offer discounted seats in the stalls and upper tiers for the performance on December 6. Please email opera@rhinebuzz.com for details. 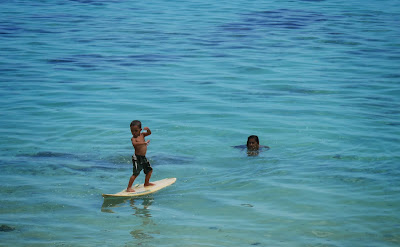 Yes, I was one of the impossibly lucky folks who won a couple of round-the-world tickets.
But I didn't want to go around the world.

Instead I chose to visit the South Pacific ..... Jurassic Park for Real
Lush green, green landscapes that jut out of the never-ending blue ocean

A people colourful, songful, graceful and with a raw beauty that will surely always be of great mystery and fascination to us

I spent 8 weeks travelling around some of the most remote islands in the world including the Marquesas which, with their geographical location of being almost 5,000 km away from mainland Mexico, rarely see visitors but for the round-the-world-sailors that take shelter in their harbours. These islands were also the destination where the expressionist painter Gauguin chose to escape European civilisation and "everything that is artificial and conventional", and to this day, there is very little infrastructure.

The Austral Islands were also on my schedule, the paradise where Fletcher Christian landed following the Mutiny on the Bounty and where in the middle of the deep, dark South Pacific Ocean I made friends with a colourful, curious tropical fish who ate out of my hand! 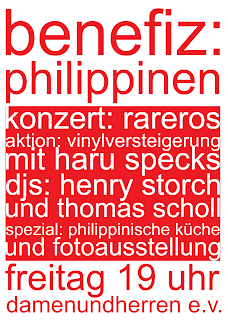 The Düsseldorf non-profit organisation damenundherren Kulturverein e.V are hosting an event on Friday November 21 beginning at 7pm in aid of the Philippines.
The evening will be filled with Düsseldorf's creative folks who will offer Fillipino food, live music, the finest djs, Haru Specks and Henry Storch, a photo exhibition and a novel auction of vinyl!
Beautiful images of the Philippines put together by designer Detlef Klatt, who has worked extensively in the Philippines for many years will also be on sale.
All proceeds will go to an aid organistion known to Damenundherren Kulturverein e.V who also have close contacts to the islands.


Well done to everyone involved in the evening, €2000.00 was raised and special thanks to
Carmen Brown who turned up as the surprise singer for the evening :) 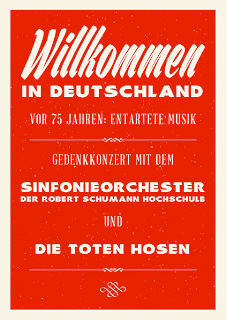 Mircea Gogoncea was the solo guitarist playing at the Tonhalle recently for the historical concerts commemorating the music and musicians that were banned in the exhibition 'Degenerate Music' which took place in the Ehrenhof in Düsseldorf, 75 years ago. Together with the Symphony Orchestra of the Robert Schumann Music School and the legendary Toten Hosen these three concerts were indeed 'more than a concert' as the city's press officer Natalia Fedossenko commented.


The performances could only happen in Düsseldorf - in this constellation, at this very location and with these artists. Those who either chose Düsseldorf, and all its rich musical heritage, to study here; or those who have been part of the local music scene for decades. Together with Germany's biggest rock band, the Toten Hosen, who have been rockin' for over 30 years and who are Düsseldorf 'kids' - the school choir who also sang in these concerts, came from the grammar school that two of the members of the Toten Hosen studied at themselves - and the students of the RSH Symphony Orchestra created remarkable music together, celebrating both the joys of the vibrant music scene of years ago and remembering in a most poignant way, of the tragedies.


This was essential viewing for anyone interested in the Düsseldorf, and indeed German music scene, both on a historical and contemporary level. I was so very grateful for the opportunity to be one of the audience, the tickets sold out in a handful of minutes.


As I met Mircea after the concert his eyes just beamed and beamed. This exceptional musician has played numerous concerts all over the world, but this experience poured out of every cell as a moment most exceptional in his young, yet all ready astounding musical life.


I asked him to write down his personal thoughts on what he had been part of, and sitting at an airport a few days later, having just won one of the 'grand slams' in the guitar world, the International 'Julián Arcas' Classical Guitar Competition in Spain, merely one week after the concerts, this is what he sent me:

Being part of the “Willkommen in Deutschland” concert series in the Tonhalle Düsseldorf this October has been one of the most exciting, horizon broadening and, above all, fun experiences I have ever had since moving to Germany in 2009!

I immediately clicked with the concept – the subtle play on words resulting from the Toten Hosen’s song “Welcome to Germany” and the message of the evening: of tolerance and acceptance as the societal antidote to the very Nazi ideological and practical intolerance against which the concert series has been conceived. As a foreigner in Germany – one who happens to have always felt quite welcome on the shores of the Rhine – this was an especially important point for me.

However, playing together with the Toten Hosen on stage, being part of the great show that they put on together with all the other musicians involved, and watching them do what they do best in front of the cheering crowd has been by far the most exciting part of it all. With great pleasure I discovered how superstars of the German punk-rock scene can be such wonderfully approachable, humble, and above all, dedicated and concentrated musicians who are not afraid to try something new and work with others on elaborate and highly demanding concepts!

Being on stage with them, in front of the clapping, whistling and constantly cheering crowd, was a truly unforgettable experience! Indeed, as classical musicians, we are used to audiences that generally choose to express their feelings and appreciation differently – and yet the thrill and satisfaction resulting from having members of the public cheer one’s every onstage move is something that can neither be replaced nor fully grasped without having been experienced first-hand.

And so I found myself during the last encore of the evening, surrounded by members of the Toten Hosen in the middle of a very sold-out Tonhalle, being carried by the audience’s wonderfully extroverted reaction and the Hosen’s own stage presence, complemented by the sheer force of a full symphony orchestra, smiling over the entire course of the piece of music and above all, enjoying: the fact that I was there, the fact that we were there, that we put on such a show, and that the audience was there to receive it the way they did.


It’s been an incredible for this for this skilled young person who is not only a world- class musician, but who is also tackling the world of technology with his pioneering platform - iolma - bringing the possibility of musical education to everyone on the planet and consequently sharing the great gift that only music can bring.