That was 2011! ESC, We Love Music and So Many Incredible People 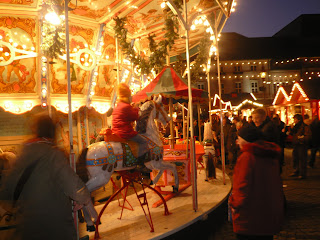 If you are staying in Düsseldorf there’s quite a nice choice of things you can do if you don't wish to stay home over the festive period.


My top pick would be the Ballet on the Rhine, Martin Schläpfer’s b.10, which I’ve seen twice now - and I’d love to see it again! There will be performances on December 22 and 26, and a few tickets left for each evening.


My Opera Scout review is here.

If you want to get out and dance our favourite DJ Henry Storch is hosting a party on Christmas Eve at his Blue Note club on Kurzer Str 13 in the Altstadt with the Siam cocktail bar next door from 11.30pm.
You will be able to groove to a mixture of the greatest sounds on a couple of floor levels.


On Boxing Day, another RhineBuzz favourite, The Schumann Quartett are playing at the Robert Schumann Hall in the Museum Kunstpalast. This time with piano, it promises to be great!


So it simply remains for me to wish you all a wonderful Christmas!
If you are travelling, stay safe, I hope all goes well without delays and that you enjoy a relaxed and fun time with your loved ones. If you are staying in the city, enjoy yourselves! The Christmas Market is still on up until December 23, so there's still time for delicious goodies and maybe I'll see you around. I'm staying here and looking forward to friends, music and lots of rest after a crazy and exhilarating year.
But more of that next week .... x 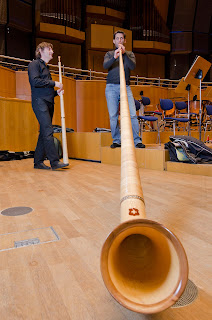 On Sunday December 18 at 4.30pm the Tonhalle will host another concert in the series "Ehring goes to a concert".
Christian Ehring is a much-loved Düsseldorf entertainer who says of himself that he is an 'amateur' classical music lover ...
So Tonhalle director Michael Becker thought he was the perfect person to invite along to host a series of concerts. The first we saw, a few weeks ago featured the music of Bach. It was a beautiful concert and Ehring's input were both funny and most informative.
Yes this is all in German, but I know that many of you are learning the language and is there a better way to learn than to both hear and see?


This Sunday, a very varied programme is given the chance to seep into our souls. Ehring will also introduce Arkadi Shikloper, a Russian alphorn player (?!) - intriguing stuff!!


There are still a few tickets available, you can reserve here.

So who was in town last night?
None other than the gorgeous Halle Berry who was filming all night at a top secret shoot for her upcoming movie Cloud Atlas.
Photographer Bernd Ahrens and I joined just a handful of journalists and photographers as filming began last night at 11pm outside the Dreischeibenhaus next to the city theatre. Despite the rain, all were in a jolly mood as we watched vintage USA cars pass by, re-creating a 1970's San Francisco.


Just how great is this for the city? Following filming in Spain and Scotland, Düsseldorf was chosen as the next location to shoot this movie which will also feature Tom Hanks, Susan Sarandon, Jim Broadbent and Hugh Grant. Coming up October 2012! 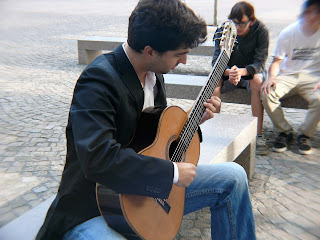 So how exactly do you respond when someone you've just met, says in a dark music club, 'you have to meet my friend .... he's one of the best guitarists in the world ....'?
A few days later Rafael Aguirre Miñarro offered to play his guitar on my sofa.
Time stands still when Rafa plays.
You kind of see his hands, his facial expressions, the way he totally gets lost in the music he is creating and you do nothing but feel the sounds coming from his fingertips and sense absolute awe. And I'm not someone who uses that phrase 'awesome' much at all!
Defined as 'one of the most versatile musicians of his generation' it is not difficult to see why this charismatic young man is making huge waves around the music world.


Rafael spends much of his time on planes jetting around the globe from one concert hall to the next. Next March his crazy itinerary includes the legendary Carnegie Hall in New York. When he played Carnegie Hall in 2010 he was obliged to give four encores, in Sao Paulo earlier this year nine encores!!!!
2011 has been an extraordinary year for me. I've met so many wonderful, wonderful people in this Eurovision year but Rafael has, without a doubt, a very special place amongst all the memorable characters that have passed through my life these past 12 months.

I'm privileged to say he has become my friend and along with his peers from the Robert Schumann School of Music, Luis Regidor (who won second prize for voice at this year's Montreaux Jazz Festival) and Mircea Stefan Gogoncea (winner of the Schmolz and Bickenbach 2011 competition, which Rafael won in 2007 as the first guitarist ever) and numerous other students and teachers of the school, RhineBuzz has grown into a group that includes some of the most gifted young musicians of our time. I truly am spellbound by this. If he is in town Rafael sometimes guests for us on the 'We Love Music' tour. Sitting on a park bench nearby we are delighted to introduce him as he suddenly takes out his guitar to the absolute enchantment of our guests who are just stunned by what happens next. 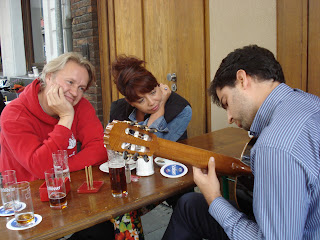 Tim D. Morand and I are treated to an one-on-one concert on
Ratinger Strasse after the tour
photo: Patricia Baeza Céspedes

Düsseldorfers have the extraordinary opportunity to experience this young musician, the Spaniard who has won the most guitar awards of all time, than any other Spaniard. On Sunday December 11 when Rafael plays in Düsseldorf at the Palais Wittgenstein. Tickets are just €8, as this concert is organised by the Department of Culture. You can only reserve tickets by calling 0211 89 96 294 or just be at the venue at 10.30am and hope for a ticket in this beautiful and most intimate hall. The concert begins at 11am.

I, and a whole bunch of RhineBuzzers will be there for sure! 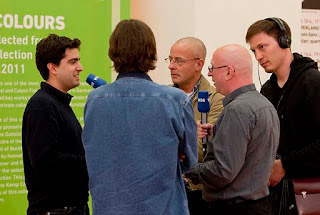 Advent is just around the corner.
The wonderful Christmas Markets in Düsseldorf
opened on November 17
and will remain glittery and inviting until December 23
Mulled wine, gingerbread, potato cakes, burnt almonds, sausages and lots of other delicious goodies await us  - over 200 stalls of food and drink delights, plus crafts and gifts, including live demonstrations of glass blowers, woodworkers
and metal smiths make for a unique Christmas atmosphere as only Germany can offer.

Ute Lemper at the Tonhalle

When Ute Lemper plays in London you'll be lucky to find a ticket. The German chartreuse has always been a great personal favourite, so I'm very happy that she is playing our Tonhalle tomorrow, Wednesday December 7 at 8pm.


This extraordinary German chartreuse has collaborated with iconic contemporary song smiths such as Nick Cave, Tom Waits and Elvis Costello to magnificent critical acclaim but it is her interpretations of Kurt Weil and Bertold Brecht that she returns to again and again. Her origins of Germany stay with her always despite her professional travels and personal choice of "home" which is New York City.
As she says herself: "I like to breathe and live inside the centers of chaos in the worlds of today and yesterday."
Tomorrow's programme reads simply beguiling when she performs "Lost Tango - An Hommage to Astor Piazzolla" which, as her website tells us, she plays with "the best and true Tango Musicians of Buenos Aires, partly the veterans of Piazzolla's original band".
Do I really need to say anymore?
Tickets available from the Heinersdorff Tickets
A concert I'm really looking forward to from long before my RhineBuzz days :)

Kisses and Lies - English Theatre at the Tanzhaus 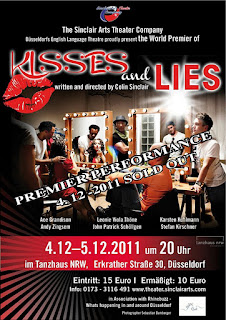 DÜSSELDORF - The Sinclair Arts Theater Company present the world premiere of 'Kisses and Lies'. An original stage play written and directed by the Companyʼs founder and artistic director Colin Sinclair. 'Kisses and Lies' presents a fly on the wall perspective of six performers who have lost the meaning of friendship, loyalty and honesty.
The action takes place in confined space of the theater dressing room. As they prepare to perform on stage their already volatile and stained relationships become explosive.