When I created RhineBuzz, the idea was to help those who spoke little or no German discover what is happening on the arts and culture scene in and around Düsseldorf. I had no inkling that RhineBuzz would become a melting pot of great talent and creativity.
The community comes up with gems and surprises for me again and again as we seem to attract the creme dé la creme in terms of the creative and gifted characters that form the international community of our area.

It was last summer when my Spanish friends Rafael Aguirre Miñarro and Luis Regidor told me a of a young musician they had met in Cologne. “You have to meet her Caroline - she’s so .... incredible!”

So now I have met Swiss cellist Nadège Rochat, and yes, she is quite something.
Just from the videos that I have seen so far she is a indeed a musical gem, meet her personally and she is self assured and absolutely enchanting.
I’ve yet to hear her play, but seeing her on film and catching the spark in my friends’ eyes tell me that the first concert of hers that I will experience will be quite, quite memorable and that, in so many more ways than one.
For Rafael Miñarro Aguirre, described as ‘The perfect guitarist’ by Akustik Guitarre Magazine and the winner of more awards for guitar than any other Spaniard, and award-winning Nadège Rochat are playing Carnegie Hall in New York City on March 14 2012.
I will be there in the audience, along with Luis Regidor, for what promises to be a wonderful evening of music and friends in the most exciting city in the world!
So, although this isn’t a piece about what’s actually happening in and around Düsseldorf, how could I not share what is being created here in our city and reaching the far corners of our globe?
I asked Rafa and Nadège about how they feel about playing such a legendary venue, this is what they told me:

Nadège: It's the third generation, in my family, that almost everybody plays music and the dream of each musician in the world is to play once in the Carnegie Hall, so I am very very happy to share the emotion of my first concert there with the few of them who will come to New-York to support me. 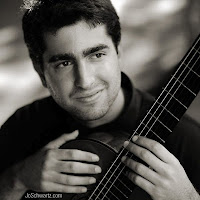 Rafael: For me it means that I will try to collect my best feelings during the next days and then try to make everybody in NY happy, helped and surrounded by the amazing acoustics and atmoshere that the legendary hall has. It is quite a thing!

Luis, who won second place at the Shure Competition for Voice at the Montreaux Jazz Fesival last summer will be playing numerous sessions in New York this coming week and to his great delight he has been accepted to take part in a masterclass with Grammy winning Kurt Elling.


For a chance to see Luis in action in our own city, he will be playing at the Jazz Rally in May. Details to follow.
In the meantime I look forward to hitting the Big Apple with these extraordinary young people. 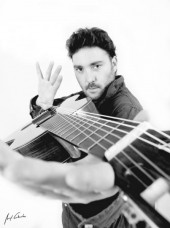 "We Love Music" the Tour 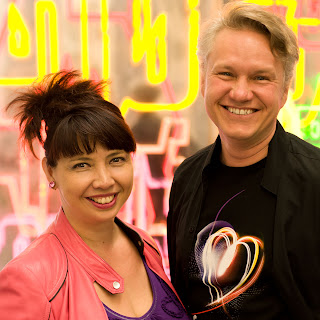 Dietmar Morand and I at the Kriwet Exhibition at the Kunsthalle Düsseldorf
©Manfred Schmidt, Düsseldorf


Eurovision might be over, but these tours can still be booked -
please enquire to tours@rhinebuzz.com for details

Four Fixed public dates, in German, with surprise guests and concert tickets to win:
Saturday at 3pm from the Tourist Info Altstadt:

The musical force of Düsseldorf is extraordinary, with protagonists such as Mendelssohn, Schumann, Kraftwerk and the Toten Hosen weaving its rich and influential history.

******************
Next week Dietmar Morand and I begin giving the first "We Love Music" - the ideal tour for the Eurovision Song Contest, when media eyes and Eurovision fans from all around the world will be focused on the city for this great musical event!
Düsseldorf Marketing and Tourism are offering 9 tours to the public in German and 9 in English from April 28 - May 14. All begin at 5pm and last 90 mins. They can be booked online here or at one of the DMT shops in town or at the main station.

I was commissioned by the DMT to write two new tours for the city, "Arts in Düsseldorf" and "We Love Music", so the last couple of months have been a frenzy of interviewing and getting to know so many people and institutions for these beguiling projects.
The doors that have opened for me have been a real delight to enter and although combined with all the other stuff I have been asked to get involved with for Eurovision it's all been, and still is a huge amount of work, I'm really honoured to have been asked to take this on.
Added to this I've been putting together two ESC Shows for the BBC. One for national Radio Two, the Ken Bruce show and then also for BBC Radio Berkshire, The Andrew Peach Breakfast Show.

For the last few weeks I have already been accompanying the first of the 2,500 foreign journalists expected around the city for ESC, using much of the material from these two tours for the press work. The response has been very good, the press have left not with one mainstream article about the city as host to ESC but with enough material and ideas for several cultural pieces on the city. They discovered a hub of arts and music that they simply didn't know existed!

To all those that invited me into their studios, homes and party basements :), thank you; for the phone numbers that have been passed onto me; the contacts that have generously been shared; for the time you have given me, thank you. And most of all for the trust and the smiles.
So, with all my heart, my thanks go to: Monique Maasen, Michael Schnitzler, Tanja Brill and Wilfried Schmerbach, Emil Schult, Christiane Oxenfort, Henry Storch, Meike Knoche and Andreas Kainz, Phillipp Maiburg, Christian Banasik, Rafael Minarro, Alvero Mendizabal, Luis Redigor, Vom Ritchie and JKP GmbH Management, Professor Hermann-Josef Kuhna, Daniel Fiene, Felicitas Hackmann, Manfred Schmidt, Marina Schuster, Dirk Schewe, Alexandra Iwan, Monika and Eckard Günnewig, ISR, Peter Rewald, Michael Sonneck, Susan Jones, Manfred Hill, Helma Kremer, Steffi Herbrich and Kristin Schröter

and to all the fans, music enthusiasts and numerous others who have spoken to us and shared their work and memories.


Thanks to Tim. You have taken on the challenge of working with me admirably
and are doing a fantastic job!

No doubt after Eurovision these tours will continue, we have mountains of material to share with you and delicious morsels of musical surprises for the tours. Other subjects are in the planning, and we do realise that we will have to offer them at a later time. I've already received numerous emails saying that the time is too early. But the RhineBuzz community have been asking me to begin tours again for a while now and so here we are, it's a great start!

Tim and I have thoroughly enjoyed the research and the music for these tours and we are looking forward to the next few weeks, the run up to Eurovision and all the city events that will be going on enormously!