Opera and Ballet on the Rhine for All 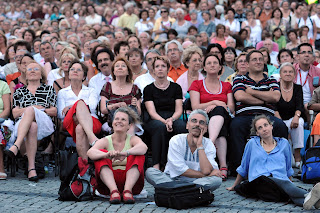 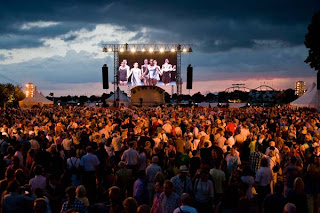 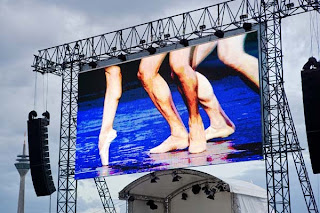 What a wonderful evening Friday was as Düsseldorf embraced Opera and Ballet for All.
An audience of 12,000 enjoyed the spectacle on Burgplatz, a few of the RhineBuzz community were disappointed that they did not manage to purchase the few tickets that became available to us for the Opera House - so they went along to Burgplatz and had a fabulous evening as they told me afterwards. The atmosphere was grand, the fireworks were dramatically launched from 2 helicopters; the Opera House performances spectacular. 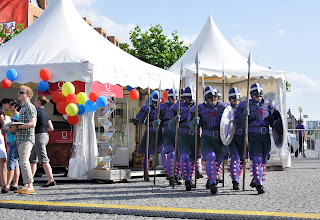 Earlier, mesmerised children enjoyed a snippet of Robin Hood as the brightly-coloured soldiers from the children's opera marched onto Burgplatz. I saw this production last December and can only urge all you parents to take your children along next season. The production is in German but I do believe that children of all nationalities will enjoy this, the production is so vibrant - the costumes and energy so bright and gorgeous. The children in the audience in December were glued to their seats, their calls for 'more' at the end deafening!


At the Gala 21 RhineBuzzers joined the 1,300 that took their seats in the Opera House. Elegant visitors relished in glorious performances, Olesya Golovneva was especially memorable with her amusing performance of Bernstsein's "Glitter and be Gay'. 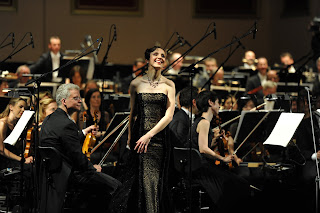 Martin Schläpfer won new fans once again as members of a wider audience had the pleasure of experiencing four pieces by his magnificent ballet company. 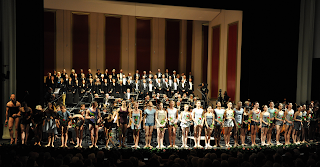 The evening was rounded off by a buffet, so at midnight those that could stay, sat down, met new RhineBuzzers and tucked into variations of pasta & wine & especially gorgeous desserts. The gala dinner upstairs in the Opera House was still going strong as we left at around 1.30am. 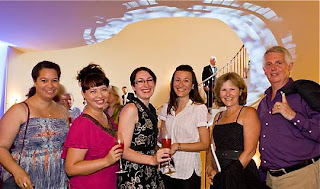 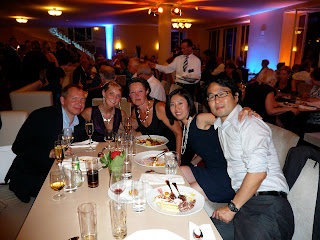 We were very fortunate that Kerry-Anne O'Brien, a member of the ballet company came to speak with us after the performance. The chance to hear about her work with The Rhine Ballet made the evening very special indeed. Thanks Kerry! 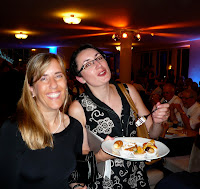 We wish everyone at the Opera House a relaxing and well-deserved summer break. RhineBuzz Opera events will be back in the autumn with newly structured ticket offers so that everyone can enjoy what this marvellous house has to offer us very lucky Düsseldorfers.

Opera Gala and b.05 Rhine Ballet 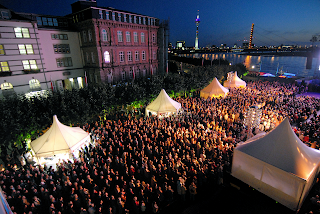 
Congratulations Rhine Ballet for being awarded the title of Best Ballet Company in NRW!
A much deserved accolade for Martin Schläpfer and his ensemble. 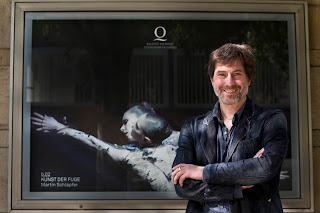 Martin Schläpfer at the Opera House
©Bernd Ahrens Photography
The wonderful Rhine Ballet premiered on June 12th at the Opera House in Düsseldorf with b.05.
This performance is made up of four pieces, three by Schläpfer and one by the Argentinian Teresa Rotemberg. Expect an evening of high emotion as you are swept along by music that includes piano pieces written by John Cage and a performance which combines saxophone and Schubert waltzes all interpreted by the incredible physicality of Schläpfer's dancers.
The final piece in the b.05, '3' celebrated it's world premier in Mainz in 2007. The words by Wiebke Hüster of the Frankfurter Allgemeine describe “There is hardly another choreographer today who is able to create works with so many layers of depth besides Martin Schläpfer – dances which really come to grips with the music, dances which open up a new terrain of movement, and finally dances which over and beyond the evening can occupy one’s imagination for so long”.
I am anticipating the evening of July 13th, when RhineBuzz will see this performance at the Opera House in Düsseldorf, with great excitement. The ballets b.01 - b.04 have all been mesmerising - I can't wait to see what Herr Schläpfer has in stall for us to round off this incredible season he has celebrated in Düsseldorf.
RhineBuzz at the Premier of b.03 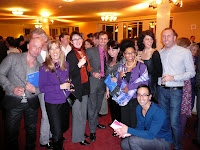 His ballets are of such power. I can only urge anyone who has never seen one of his works to join us. We have had wonderful feedback, especially from ballet novices, you will not be disappointed and will almost certainly get to meet some great new people too. Our groups are a colourful bunch of vibrant characters of all nationalities.
If you wish to join us, please email caroline@rhinebuzz.com. We enjoy discounted tickets for the best seats in the house - you can see right up close the incredible physical effort and feeling that oozes out of theses amazing dancers.
Opera and Ballet for All 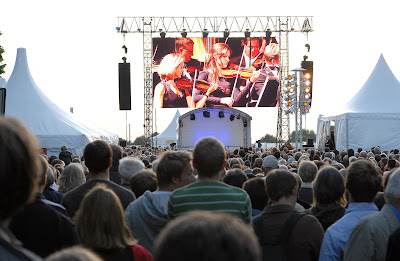 
On 16th July the Opera House will present "Opera and Ballet on the Rhine for All" following the great success of "Opera for All" last year.
With the Rhine majestically as the backdrop, a massive screen of stunning quality is erected on Burgplatz, so that everyone is able to take part in the performance that is transmitted live from the Opera House that evening for free. Take along a deck chair and go along, you'll have a ball!
"Opera for All" had a truly festive atmosphere about it last year and no doubt this new event will encompass the same magic. Entertainment is provided from 3pm on the open-air stage. The performance itself in the Opera House, a stunning program of opera and ballet hosted by well-known personalities from German TV and film, begins at 8pm. RhineBuzz is thrilled to have been able to secure a few tickets.
The entire Opera House will be on stage - the Düsseldorf Symphonic Orchestra, The Choir, The Children's Choir, members of the Opera on the Rhine, the Rhine Ballet and world-renowned guest performers.
A truly magnificent event.

Hello Rhinebuzzers - a dear German friend has just called me and said that
Antenne Düsseldorf has voted us the website of the week!
How cool is that?
We are very pleased - thank you!
It's a shame I didn't hear what they said about us on June 7th, but apparently it was something along the lines of - cool site that the Düsseldorfers were now also checking for a novel view of what was happening in their city.
The tours and events they said were also well established and highly regarded ...
If you understand German you can read and listen here!

Le grand geste! opened at museum kunst palast in April and as part of the colourful accompanying program Thursday 6th May saw a talk in English by Vincent Katz, poet and arts critic on 'Artists in New York around 1950'.
This coming Thursday, July 15th the Ed Harris movie "Pollock" will be shown at 6.30pm in the museum. It will be in German.
Every Thursday the museum is open until 9pm. From 15th July until 1st August the mkp is offering two for one entry. Buy one ticket and bring a friend for free!
Le grand geste! features some 200 works in an exhibition of abstract and informal ideas from 1946 - 64 when this new form of painting was being celebrated around the globe. Bold and powerful, including the well-known paintings by Jackson Pollock this is a show not to be missed. A massive 1500 people attended the opening I am told.
Create your own Jackson Pollock!
museum kunst palast shared this fabulous link with us - have a go it's great fun!
The Studio at mkp
Next Arts Session after the summer break: Sept 12th 2 - 4pm and Sept 23rd 7 - 9pm
At the last After Work Arts at mkp the RhineBuzzers had a ball as they put this into practice for real. They had a fabulous time - 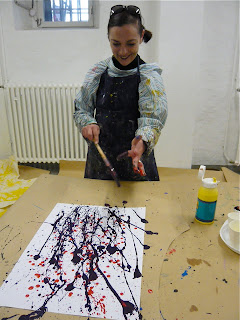 "It was the best! Came home full of energy, what a great event, the After Work Art events at Museum Kunst Palast are amazing!" 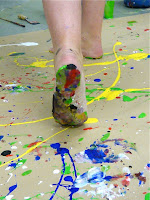 It was outrageous fun!!! I think it reminded us all of what it once felt like to be in kindergarten and get in touch with our inner child, inner artists as well as work as a team and be creative as a group. I highly recommend it!"
"Loved it!"
email caroline@rhinebuzz.com to reserve your place.
Thank you to Ann-Katrin for the photos. 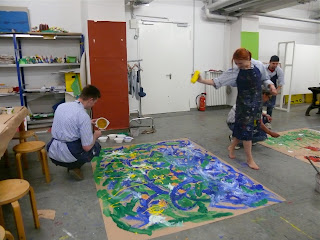 In June we hosted two dates on a Thursday and a Sunday. Both were a great success. After the summer break in August we will be back fro September every fourth Thursday of the month.
****************
The 440Hz Series at the robert schumann hall at mkp 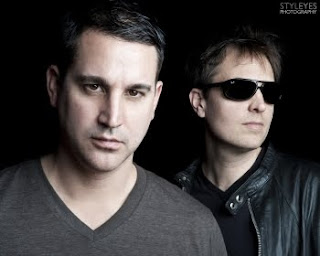 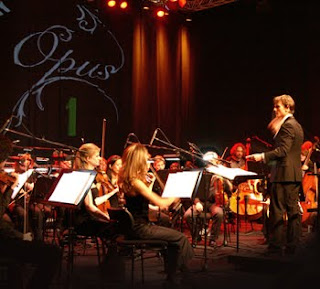 Blank and Jones and Alexander Shelley and The Schumann Camerata Orchestra
On Saturday night I was invited to the Blank and Jones and Alexander Shelley concert at the robert schumann hall on the lower floor of mkp.
As part of the 440Hz Series the aim of these concerts is to bring classical music to a younger, broader audience by combining the talents of award-winning British conductor and cellist extrordinare Alexander Shelley with the young (average age 24) Düsseldorf Schumann Camerata Orchestra which he founded and the various genres of music - hip-hop, jazz, a cappella or as on Saturday night, electronica with Blank and Jones.
Now I'm not an electronica fan, but always open to have a listen to something I'm not 100% keen on, my companion and I walked into the cool museum on Saturday evening quite early as I wanted to see who was coming to this concert.
It was indeed a very mixed audience of all ages, including everyone from young dedicated Blank and Jones fans to a few retired folk and everyone in between. I did definitely miss any signs of the international community in those gaining great pleasure from the fantastically air-conditioned foyer. We obviously have yet to discover the joys of 440Hz.
What can I say? The concert was wonderful!!!
Even my vinyl-loving, "real instrument" aficionado companion was quite taken by the atmosphere of the concert, the tones and sheer enjoyment with which these bright young classical musicians wove, blended and performed with the djs.
Conductor Alexander Shelley has a presence on stage that is exhilarating - he so obviously loves his work enormously and his musicians just adore being part of this project. The smiles on their faces said it all.
The evening included pieces by Ravel and a composition by Shelley himself.
Can't wait for the next 44Hz concert which if I understood the introduction correctly will involve a karoke-singing opera singer and the orchestra ... don't ask me! Just make sure you are there. We will let you know in plenty of time when it is.
RhineBuzz really enjoyed the Schumann Quartett event we took part in earlier in the year and now we know about more of your great program.
Thanks mkp for another wonderful evening!