Fiona Leonard is new in town.
Originally from Australia, Fiona is an author, scriptwriter and blogger whose wanderlust has taken her across 26 countries on five continents.
I am very happy to welcome Fiona to RhineBuzz, she will be reviewing much of what we do - can't wait :)

Visiting a concert space for the first time is a wonderful treat; a chance to not only experience a performance but the venue as well. Experiencing the Dusseldorf Symphony at the Tonhalle on Monday night was a delight both in terms of venue and performance. While many venues separate the performers and the audience, the Tonhalle is at once both an intimate and a soaring venue. With its impressive domed roof, the Tonhalle, places the audience both in the midst of the orchestra and beneath an arcing sky.


Such a space was a perfect setting for the Dusseldorf Symphony’s performance of Dvořák’s Symphony No. 9 in E Minor, the recently composed, ‘Symphonic Transformations of a Theme by John Beall’, and the Symphony’s partnership with Dutch piano prodigies, Lucas and Arthur Jussen, performing Concerto for Two Pianos and Orchestra in D Minor by Francis Poulenc. 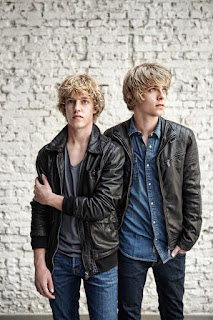 The evening opened with the premiere of ‘Symphonic Transformations of a Theme by John Beall’; a piece composed in 2014 by American, Kevin Beavers as gift for his composition teacher, John Beall. This is an innovative work that gives as much space to its percussive section as to the more traditional orchestral voices. It is always a pleasure to experience a new piece presented for the first time and when called to the stage at the end of the performance, Beaver’s clear delight at having his composition brought to life was wonderful to see.
It would be easy to read a symbolic message into the second part of the evening’s performance: a section that began with the orchestra being rearranged to accommodate two young faces on the stage. As the orchestra waited patiently, chairs were removed and two grand pianos moved to centre stage to await the arrival of Dutch piano virtuosos, Lucas Jussen (23) and Arthur Jussen (19).
With blonde locks and orange socks rounding off their suited ensemble, the brothers looked as if they had got lost en route to a very different type of concert. But their mastery of Poulenc’s Concerto made it clear they were exactly where they were meant to be. The Jussen’s display an unabashed engagement with the music, delighting in their performance and that of their fellow musicians.  The audience’s enthusiastic response to both the Poulenc and the Jussen’s encore of Bizet’s ‘Jeux d’infants  – played on a single piano – left no doubt as to the Jussen’s right to claim centre stage.


The finale of the evening, Dvorák’s ‘New World Symphony’ was a fitting end to a program that felt like something of a reimagining of the musical space.  A symphony that has literally been to the moon and back, Dvorák’s 9th Symphony speaks to both its European heritage and Dvorák’s experience of the burgeoning New York of the late 1800s. Conductor, Dmitry Liss, an energetic and enigmatic performer in his own right, drew out an elegant collection of solos, particularly from the wind and brass sections, matching them with the strength of the Symphony’s string section, to bring the evening’s journey to a triumphant close.